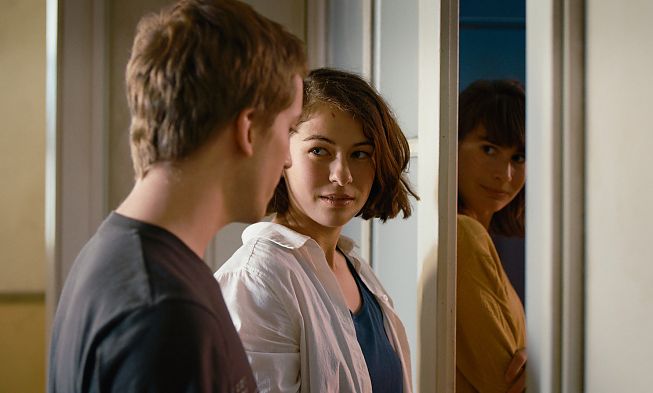 The Girl and The Spider

Mara and Lisa are giving up their flatshare which they share with one other roommate. Ramon and Silvan Zürcher depict what it‘s like for them to live together, in rooms and in relationships, with exacting images and a precisely composed rhythm.

There‘s constantly someone walking into the shot: the neighbor, who just wants to have a look at who is moving in, a kid that‘s lost, even a spider who has returned to the apartment through no fault of its own.

In THE GIRL AND THE SPIDER Mara (Henriette Confurius) and Lisa (Liliane Amuat) are giving up their flat which they share with their roommate (Ivan Georgiev). Lisa has moved to a new apartment ,Alex Haßkerl‘s camera has moved in with her. Between boxes, doors, and windows Mara and Lisa greet friends, craftspeople, the mothers, the neighbor, remaining in the door frame and in the kitchen, looking at the washing machine and the dining table, as they negotiate life phases, eroticism, and the past in a few sentences with their counterparts. The images are static. The characters and relationships are not: Lisa‘s mother (Ursina Lardi) is chewed out by her daughter and flirts with someone in the apartment, Mara‘s behavior is hurtful towards everyone, stray cats meet old women and in the apartment below there‘s a shy man and a modern vampire. Ramon and Silvan Zürcher depict what it‘s like for them to live together, in rooms and in relationships, with exacting images and a precisely composed rhythm.

The Brothers Zürcher had a festival success with THE STRANGE LITTLE CAT. The film, about an extended family constellation in an apartment, moving similarly from room to room and conversation to conversation was in the 2013 Forum program at the Berlinale. Eight years later, the brothers seemed to have sharpened their tools with this film. The dialogue is sharper, the glares more loaded. There‘s always a bit of threat or sexual attraction in the air among the everyday and seemingly mundane. There‘s no escape from the apartment yet: their next film is meant to be the last part of the trilogy.