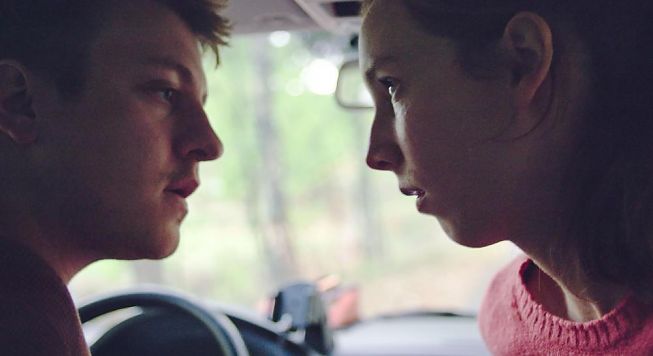 Father Urs convinces daughter Jette to do a voluntary social year in South America – but she doesn‘t really want to leave the province.

It‘s meant to be a big trip: one year in Costa Rica as a hospital volunteer. Jette‘s bags are already in the car as she says goodbye to her horse in her garden and her father Urs rushes her. He wants to make a stop at his brother‘s on the way to the airport in order to pick up Jette‘s camera. When he doesn‘t open the door, which seems to happen often, Urs begins to worry and tries to kick the front door in. While Urs gets more and more hectic on the building‘s first floor, his daughter has to catch her flight after all, Jette waits for him downstairs, confused, but less stressed. Suddenly her boyfriend Mario (Thomas Schubert) comes by because he wants to spontaneously drive her to the airport. In Ulrich Köhler and Henner Winckler‘s DAS FREIWILLIGE JAHR it‘s the small moments, the coincidences, and the looks shot by Patrick Orth‘s carefully observing camera that tell the story.

So it is not the story of a big trip. Jette (Maj-Britt Klenke) doesn‘t seem excited by it from the start, her father (Sebastian Rudolph), on the other hand, couldn‘t be more thrilled. At the airport her and Mario turn around and drive off, sleep in the car, and turn their cells off in order not hear anything from their worried parents. Jette‘s indifference about her trip contrasts with the mischievousness she lives out inside the car. But this free phase doesn‘t last long. After a fight the parents appear. What looks like a father‘s loving attention in the start of the film soon reveals itself to be unhealthy expectation: the daughter should see the world which he can‘t experience in the village. A casual family drama with characters that go deep without using many words. And Jette does make a small journey towards change after all.