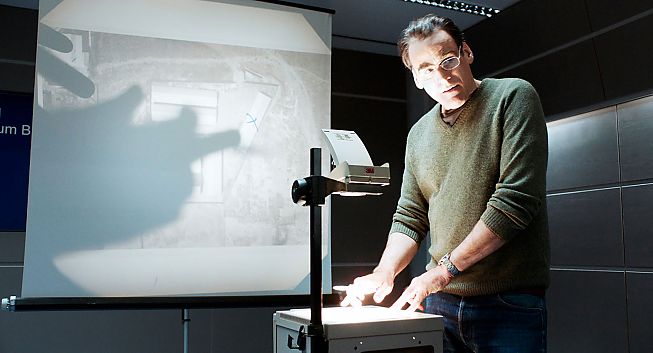 In his passionate political satire, Johannes Naber dramatizes one of the largest spy scandals in recent decades: the involvement of the BND in the falsified information about bioweapons experiments in Iraq that served to justify the Iraq War.

Doctor Wolf shouts “Fischer is sitting there! Why isn‘t he saying anything?“ at the TV. It truly is the question that begs to be answered after watching this film about the gravest espionage catastrophe and one of the biggest political scandals of the 21st century. The justification of the Iraq War was based on a report from the BND which was already revealed to be a lie but was still presented as a true, verifiable eye witness account to US foreign minister Colin Powell at the UN plenary assembly. Prime minister Gerhard Schröder, the foreign minister and then chair of the UN assembly Joseph Fischer and Schröder‘s chancellery minister Walter Steinmeier knew that the witness statements were a lie and stayed silent.

Johannes Naber turns the affair surrounding the Iraqi asylum seeker Rafid Alwan, who presented himself to the BND as a chemical engineer in Saddam Hussein‘s weapons factory into a political farce that‘s reminiscent of Helmut Dietl‘s SCHTONK. The film isn‘t sheepish about getting silly, but does remain completely serious when it comes to the facts. Bioweapons expert Wolf, nicknamed “desert fox“ by his colleague, believes that Iraq was manufacturing the anthrax virus despite the UN inspections which he was involved in. But he‘s primarily sexually interested in his US colleague. His boss Schatz (Thorsten Merten) appoints him as the agent handling Rafid Alwan. The Iraqi wants a German passport for him and his family and tells Wolf exactly what he wants to hear that he downloaded from the internet – there are weapon factories on trucks in Iraq that are regularly getting unloaded somewhere north of Baghdad. Alwan‘s disclosures seem like a big coup for the BND, they celebrate with prosecco and get congratulated by the German government and foreign secret services. Then it quickly becomes clear that Alwan was lying and he could only do that because of the BND‘s sloppiness. In order to hide to humiliation, the “Burn Notice“ isn‘t passed on to the CIA, and the US secret service kidnaps Rafid Alwan, the allegedly big, mysterious source they coined “Curveball.“

All this really happened, even the bizarre kidnapping of Rafid Alwan. The German government knew the facts in February 2003, when Powell spoke at the UN. The real question remains: “Why is Fischer not saying anything?“ Why aren‘t Schröder and Steinmeier saying anything? And why were they never held responsible even though they share culpability for the war that cost hundreds of thousands of lives and enabled IS terrorism? Neither the politicans nor their parties have made a statement about the affair. President Steinmeier could give the answers.