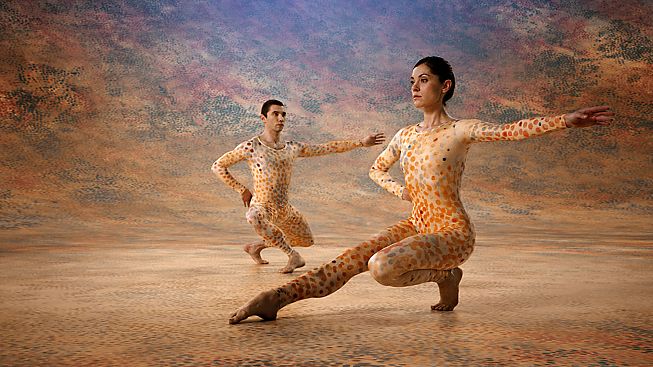 A large portion of the film about groundbreaking choreographer Merce Cunningham is a reinterpretation of Cunningham‘s choreographies whereby 3D technology makes the spatial depth of dance accessible.

The 1940s didn‘t just cement US political hegemony, but also a new cultural awareness that let American art step out of the long shadow of the European avant garde for the first time. Artists like Janet Sobel, who pre-empted the many innovations of the great Jackson Pollock, John Cage, and Merce Cunningham formulated ideas about art that prioritized coincidence, improvisation, and the process above human intention and finished works. Janet Sobel let colors run on canvases and involved materials in her design. John Cage implemented coincidence by letting his compositions be decided by a coin toss and abolished the difference between music and sound. In his legendary piece 4‘33“ for example, he didn‘t play a single sound for four minutes and 33 seconds and turned the stillness, the fine sounds of the atmosphere, the cracks and coughs coming from the audience into music. Dancer and choreographer Merce Cunningham similarly tried to expand the repertoire of dance movement and break up the border between high art and daily life that way.

Cunningham‘s influence on post-war art is still underestimated to this day, and so it is great that CUNNINGHAM by Alla Kovgan puts his collaborations with prominent artists like John Cage and Robert Rauschenberg into focus. CUNNINGHAM avoids the biographical derivation and present day classification. Instead, a large portion of the film is made up of new interpretations of Merce Cunningham‘s choreographies, whereby 3D technology makes the spatial depth of dance accessible. The film doesn‘t just imitate the experience of a real dance performance, it also stays true to the performative character of Cunningham‘s art that doesn‘t tell a story, but lets the audience associate with abstract movements instead. CUNNINGHAM doesn‘t show who the choreographer was, it shows what he did.