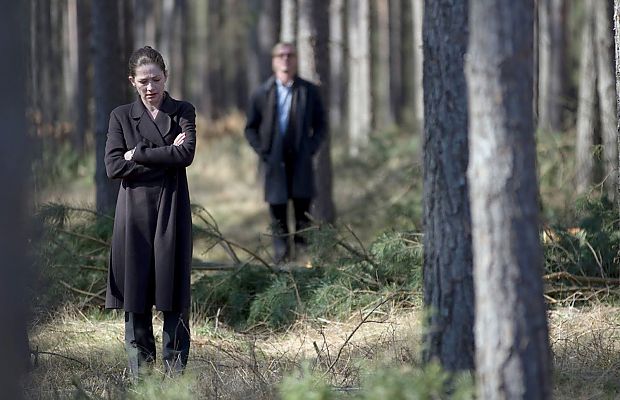 Omer Fast’s second feature is a postmodern thriller that continues his 2012 “Continuity“ installation and is chock-full of unreliable narrators. Everyone is named Daniel and involved with the war in Afghanistan

Daniel (Constantin von Jascheroff) is escaping the war. The young German soldier in Afghanistan runs away from tanks and is in the desert for so long that he comes across a village. Later on a uniformed Daniel (Josef Mattes) will be picked up by his parents from the station. They baked a cake with the German flag for him. The young soldier arrives, unpacks, takes a pill, and suddenly sees worms in his food. Daniel (Lukas Steltner) isn’t feeling well but before that he tells a story of a comrade who was surrounded by an Afghan clan while peeing. The people he is talking about appear in a tableau vivant in the living room. Daniel (Niklas Kohrt) sees an eye floating in his wine glass. But Daniel (Bruno Alexander) is actually much younger and appears later in the game. He is too young for Afghanistan. And he is actually called Felix.
It is swarming with unreliable narrators in Omer Fast’s second breathtaking feature film, a follow-up of his “Continuity” installation in 2012. Fast’s beloved themes are in focus: war, loss, and identity, which he takes to the extreme this time,not only because of the queering that occurs during the numerous (homo) erotic moments his characters and stories experience. The Daniel we see in Afghanistan works as a part-time hustler in his small town for drugs which he gets from the local bakery. It’s unclear whether he has men as clients because it’s easier or because it has something to do with his sexuality. Then he lies on the bakery floor in an image that plays with the topos of s&m sex. Role playing is a constant feature and the tragedy of the event mix with other things between the different Daniels and their parents with an unexpected eroticism.
CONTINUITY is a captivating mystery thriller embedded in postmodernism with an ambiguity that always goes back to the political. The smart deconstruction of cinematic reality isn’t an end in itself because the unanswered questions go beyond the film’s world and are a gift to audiences that don’t like simple truths.