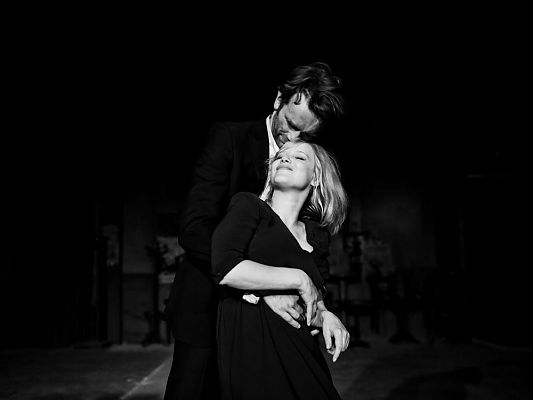 Poland, the 1950s. Educated professional Wiktor and working-class Zula meet due to the music group Mazurek. They begin a passionate love story that starts off in communist Poland, moves to the West, and goes back to Poland again.

Two lovers unwilling to compromise find each other other, lose each other, and unswervingly look for each other again and again. Paweł Pawlikowski‘s new film COLD WAR is set in Poland in the 1950s. In monochrome photos he conjures up a mood of decay and change that can also be found in the landscapes and people. Everything is under the control of Stalinism. The Polish music troupe “Mazurek“ can‘t escape the influence either and are appropriated by the regime. The reserved and educated Wiktor meets energetic and defiant working-class Zula at a Mazurek show. A passionate and catastrophic love story begins that takes the two of the out of communist Poland to the west and back again. The music is very present through it all: from Polish folk songs to western jazz music of the 50s.

Their romance, which Pawlowski loosely based on the story of his parents, is characterised by Wiktor and Zula‘s unwillingness to consider the other. At the same time they spend a lot of energy making amends for the pain that they have caused. The emotions that they develop for each other are unclear and often brutal, but they‘re also absolutely free – in contrast with the two individuals who want to escape the constraints of their country and are standing in their own way. Wiktor and Zula are tragic figures, but they don‘t seem predestined to their fate. Everything they suffer and do to themselves they do without calling for compassion or pity. They are self-reliant in their experience – for good and for bad.