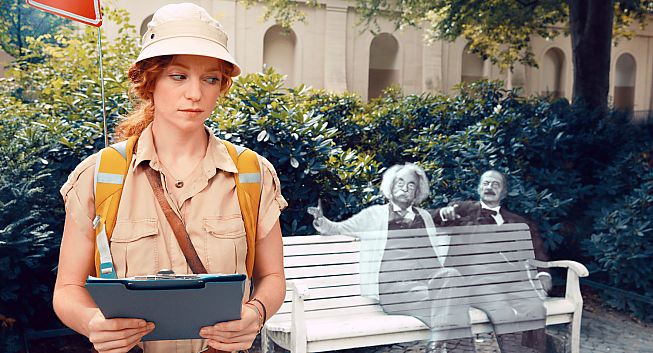 Erik Schmitt‘s first feature-length film is a playful, partially animated, lively homage to Berlin and a red-headed young woman named Cleo who is on a scavenger hunt.

Erik Schmitt made a name for himself with short films reminiscent of Jean-Pierre Jeunet (AMELIE, DELIKATESSEN) and Michel Gondry (SCIENCE OF SLEEP, MIKRO & SPRIT) with their strange characters and dream-like mixture of live action and animation. His first feature-length film is a homage to Berlin and a red-haired young woman named Cleo (Marleen Lohse) who carries the secrets and turmoil of the city within her. It overflows with garish, exuberant, and playful details, takes intricate detours, follows wild subplots, takes you to dark side alleys, and keeps introducing new surreal characters. The plot is sometimes almost forgotten in the process.

Cleo is a real Berliner. She was born in an ambulance on the day the Wall came down, in the middle of the crowds in front of the wall. Her mother didn‘t survive labor, but Cleo is raised by her loving father (Fabian Busch) who takes her on adventures and introduces her to the secrets of Berlin. The two want to track down the treasure of a famous Berlin bank robber couple, the Sass siblings, on their last mission. They find a bomb from the war instead and Cleo‘s father dies. Fast forward to adult Cleo who works for a Berlin tourism business. She avoids people, is afraid of basements, and is more interested than ever in a time machine that undoes past events. One day a man comes into the store: Paul (Jeremy Mockridge) is a house boat owner and recently acquired a mysterious treasure map. Together they embark on a scavenger hunt for the treasure in the Berlin underground.