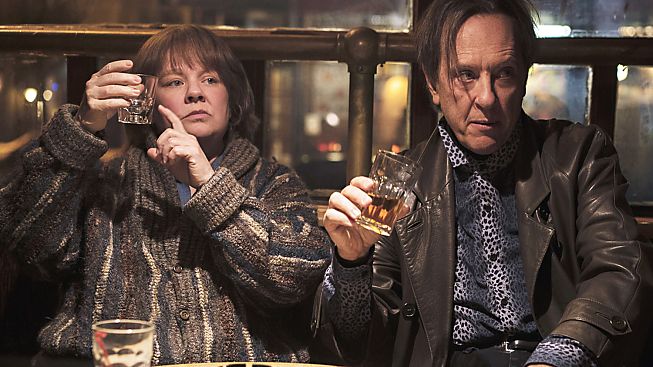 Can You Ever Forgive Me?

Melissa McCarthy plays real-life author Lee Israel, a struggling malcontent writer, propped up by alcohol and affection for her cat, who turns to forgery and theft after her last book is rejected for publication.

Horrible people committing petty crimes often makes for great comedy and Marielle Heller’s third feature film as director is just that. Melissa McCarthy plays real-life author Lee Israel, a struggling malcontent writer, propped up by alcohol and affection for her cat, who turns to forgery and theft after her last book is rejected for publication. Israel and her camp partner in crime, played winningly by Richard E. Grant, defraud rare book collectors of thousands of dollars by faking, rewriting, and stealing the correspondence of various literary notables, all of whom more successful than Lee herself.

McCarthy and Grant’s performances are excellent, making unpleasant characters deeply sympathetic and relatable, and the chemistry between the two leads is an unexpected delight. The film is less a crime caper than a meditation on what desperately lonely and unhappy people will do for a little recognition and financial reward. Israel is largely ignored and ultimately abandoned by her agent because she refuses to play nice – refuses to play the game, prompting her slide into a spiral of lies, fake letters, and swindled booksellers. The film’s strength lies in its broad relatable humour coupled with a genuine warmth and sympathy for its subjects. It helps, of course, that along the way the filmmakers get to quote some of the real-life Lee’s acid wit, often disguised as that of other writers. Heller and her cinematographer Brandon Trost make great use of New York, ranging as the action does from the city’s slightly seedier underside to its brownstone bookshops and penthouse apartments.

Lee’s exposure and eventual arrest are depicted with a crushing, ordinary, and unavoidable inevitability. Overall, the stakes of the film are incredibly low key; the dramatic high point comes with the accidental death of a beloved house pet, and yet the significance for Lee of her experiences is wholly clear and understandable. This is an excellent film driven by two brilliant central performances and a perfectly pitched screenplay from Nicole Holofcener and Jeff Whitty.