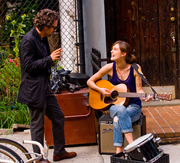 There are songs that can change your life, songs that can establish a new relationship or rescue one that is fragile or estranged. And then of course there are songs that end a relationship… After Gretta (Keira Knightley) realises that the new love song written by her shooting star boyfriend Dave Kohl (Adam Levine) was about another woman, she decides to leave New York City and return to England. But during a live-gig on a small stage in the East Village, she's discovered by Dan (Mark Ruffalo), who just lost his job as a record producer. She lets him convince her to record an album.

Since they can't afford the costs of a studio, Dan and Gretta decide to record the demo album on the streets of New York. In the process they grow closer. At some point, Gretta calls up her ex and sings her goodbye/tell-off song to him on his voice mail.
The film's director John Carney repeats the success formula of his debut film ONCE: powerful singer-songwriter ballads and likeable actors who can sing. Keira Knightley performs Gregg Alexander's songs, the frontman of the New Radicals, with surprising urgency, and she and Ruffalo are well-chosen as the charming and unlikely duo whose courtship is based on their shared love for music. Whether a song can actually save a life is not answered in Carney's film, whose original and more adequate title is BEGIN AGAIN, but his film does convey the value of good songwriting and original music that's recorded in this film in many of New York's alleyways, rooftops, parks, and subways.