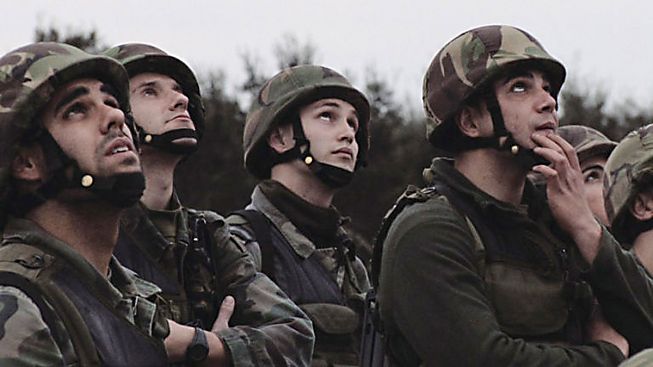 CAMPO, shot in a military base that is also a nature reserve, is nothing less than a portrait of human existence.

South of Lisbon, in the Setúbal region of Portugal, is a nature reserve that is also home to the the Field Firing Range of Alcochete, one of the largest military bases in Europe. Here, surrounded by sheep, birds, and nocturnal creatures, soldiers practice their war games in the night, illuminated by a field of stars.

CAMPO, a documentary by Tiago Hespanha, takes as its subject matter the idea of the field — spaces that exist above, below, and within. The word campo, explained by the narrator, comes from the Latin word “capere” — to capture. It is where fruits and animals were kept, a place for breeding and fighting. In ancient Rome, the arena where soldiers trained for war was also called the “Campo de Marte” — The Field of Mars.

With this etymological conflict as old as antiquity, CAMPO travels into a territory of mythic time, as the narrator uses the Campo de Tiro de Alcochete to examine humanity’s Promethean place in the world. Scenes are slow-paced, meditative, and essayistic, punctuated by the requisite explosion to remind us of dichotomies between life and death, soldier and civilian, human and animal. In this world of contrasts, a farmer tries to deliver a stillborn lamb from a dead mother sheep, a human mother questions the effects of the nearby explosions and shockwaves, and stargazers debate the life cycle of quantum memory.

Although it attempts to address epic questions of humanity’s place in nature, the film lacks a visual style to explore these themes. The director focuses more on literary and scientific references, creating a script with source material ranging from Franz Kafka to Carl Sagan. Without this visual pleasure, many may feel the fragments of philosophy aren’t enough to deliver satisfaction.

For many, the experience of CAMPO will be similar to that of a soldier on watch on a long quiet night. The position will require patience, attention to detail, and an acceptance of extended boredom. But in this field of vision, there may also be moments of existential clarity, and for some perhaps — even a redeeming transcendence.