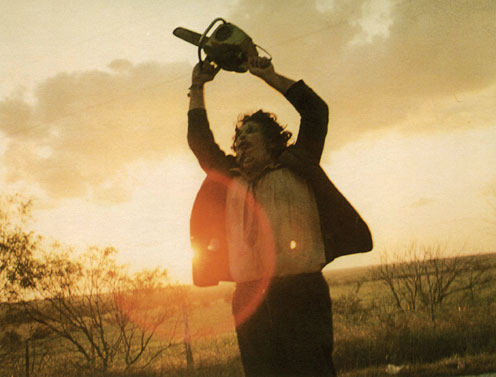 This classic horror film has been banned from German screens for decades. Now Leatherface is back from his exile to clandestine screenings, smuggled DVDs and torrent-downloads in a glorious, restored 4k-digital cinema print.

Darkness. Digging. Flashes of images showing decomposing body parts. August 1973. The radio reports on graves being robbed and desecrated. The dead are arranged in bizarre ways. In an old bus five young people, one in a wheelchair, are driving through an isolated area of Texas – Sally and her brother Franklin, Sally’s boyfriend Jerry and the couple Kirk and Pam. After they check to see that their grandfather’s grave is undisturbed, then they look for his old house. On the way they pick up a hitchhiker who starts acting strangely so they kick him out of the van. The tank station is out of gas and they are told to try a farmhouse nearby. The locals are not overly friendly to strangers. Kirk and Pam go together to the house to ask for gas. Kirk knocks on the door but no one answers. He slowly makes his way down the hallway and a door opens up. A huge man with a mask kills Kurt with a chainsaw. Leatherface pulls the body behind the door. The door slams. The massacre begins.
For over 30 years the film THE TEXAS CHAINSAW MASSACRE, a horror classic, was banned in Germany, even though it was lauded by the MoMA (New York's Museum of Modern Art) and received critical acclaim. German authorities confiscated Tobe Hooper’s cult classic because it supposedly “glorified violence.”
THE TEXAS CHAINSAW MASSACRE is considered one of the first “Splatter” films – a senseless term that is used to exclude films with bloody special effects from the horror genre. There are no more splatter scenes in TEXAS CHAINSAW MASSACRE as what one sees in a HARRY POTTER film or in LORD OF THE RINGS. In one scene Leatherface saws into someone’s leg and the camera shows the wound, but that’s about it. Yet thanks to Tobe Hooper’s editing, camera shots, wonderfully bizarre setting, and shifting tempo, the viewer has the feeling he or she has seen more brute force than what was actually the case. In the restored version the sound mixing is particularly impressive. Tobe Hooper and Wayne Bell combine diegetic and non-diegetic sounds in order to create the feeling of appalling danger. In the scene when Pam and Kirk approach the Sawyer family home, one hears the humming of an electric generator, the screeching of the chains, bones crunching, cries ring out, tin cans rattle. Pure terror that becomes even louder and culminates in a nightmarish scene. One of the best horror films of all time is back and exactly in the place where the genre was invented and where it belongs.