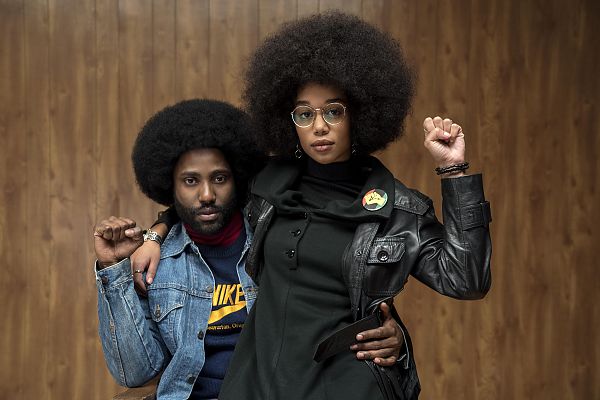 BLACKKKLANSMAN tells the (true) story of black police detective Ron Stallworth who pretended to be a white racist on the phone and entered the most inner circle of the Ku Klux Klan in the 70s.

BLACKKKLANSMAN is Spike Lee‘s best and angriest film in a long time. Lee succeeds in the feat of making a funny and suspenseful thriller about the true story of black police commissioner Ron Stallworth who pretended to be white on the phone and advanced into the innermost circle of the Ku Klux Klan in the 70s. It is both a morality tale about the haunting continuity of racist motifs in film and reality as well as a story of resistance, from the Black Power movement to Black Lives Matter.

In the 70s the police department of the mostly white and protestant small university town of Colorado Springs implemented affirmative action and hired black people to get on the detective track. Ron Stallworth (John David Washington) has to put up with humiliating questions during his job interview that white people surely aren‘t asked: drugs? Single? A lot of sex? Sex with white people? Politics? Ron is shuffled off to work in the archives at first, and when he demands to take part in an investigation, his first mission happens to be an undercover investigation during a speech by Black Power/Black Panther party activist Kwame Ture aka Stokely Carmichael where Ron is meant to look for subversive elements. Ron isn‘t just caught in a moral dilema during the event because Kwame Ture‘s speech clearly moves him, he also falls for Patrice, a student activist.

This heightens Ron‘s inner conflict, because Patrice, with her Angela Davis hair, calls the police “pigs“ which is typical in the student movement. Black pigs who turn against their own people are the worst kind of pig of course. Ron mumbles something about needing to change the system from within, but the conversation gnaws at him. It gnaws at him for so long until he replies to a newspaper ad of the Ku Klux Klan and he finds himself on the phone with the head of the local branch. He plays a racist white man so well that he is immediately accepted into the conspirative tier of the Klan.


Ron even succeeds in convincing the racist police chief that it makes sense to monitor the KKK. His Jewish colleague Flip Zimmerman (Adam Driver) takes over Ron‘s role during the real encounters with the racists while Ron gets close to David Duke (Topher Grace), the “Grand Wizard“ of the KKK who tells him he can recognise a black person by their voice among other things. Flip didn‘t see himself as a Jew until he encounters the KKK nuts who want to see whether he‘s circumsized and want him to undergo a lie detector test. A black policeman who passes as white, a white policeman who sees himself as Jewish for the first time due to a racist threat. Lee tackles numerous historical and current debates in the black community in this scene while also dealing with rising antisemitism that isn‘t just coming out of white racist corners these days. Flip‘s self-identification as white is also an echo of “passing for white,“ an age-old topic in Hollywood seen in films like Douglas Sirk‘s IMITATION OF LIFE where the daughter of a black housekeeper tries to pass as white. The colorism debate where actors of color with light skin play positive roles while dark skinned actors have to play the drug addicts and the disenfranchised (like in the Oscar nominated film PRECIOUS) is a current echo of these scenarios. It‘s also about the changing values led by the Black Power movement in the 70s. Kwame Ture, a Black Power activist and the co-founder of the Black Panther Party, talks about how he identified with Tarzan until he noticed that he was encouraging white people to kill black people. The identification with the part of one‘s identity that is negated by white hegemonic society nixes the attempt at passing. Lee shows how Black Power was a reaction to “White Power“ slogans in Hollywood and the Klan.

Spike Lee frames and supplements the story with film and media quotes. His film begins with a scene from GONE WITH THE WIND (1939) in which Scarlett O‘Hara searches for her beloved among the wounded southern soldiers in the Civil War, a “primal scene“ of the racist victim myth and Joseph Goebbels favorite film which pushed the development of Agfacolor: racist myth production was a method of war. After that Alec Baldwin appears as an ultra-racist TV agitator against school and university integration in the 60s while racist demonstrations and attacks are seen behind him. The fact that Baldwin is one of the most famous Trump parodists in the US refers to the same motifs of racism: in the 60s, in Trump‘s speeches about Mexican immigrants, or our German racists. The highlight of BLACKKKLANSMAN is a screening of D.W. Griffith‘s racist rabble-rousing film BIRTH OF A NATION (1915) while long-time activist Harry Belafonte holds a speech about the lynching of a young man in 1916 by a mob incited by BIRTH OF A NATION in parallel. The end of the film is also a reference to the present: images of the demonstration in Charlottesville where a racist attacked a crowd with his car, David Duke portraying himself and others like him as victims, and Donald Trups talking about “good people on both sides.“