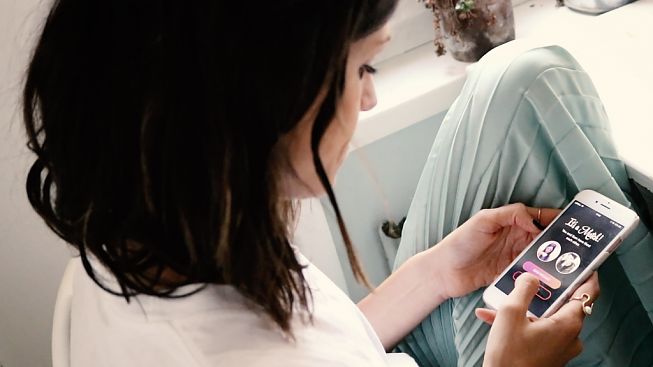 BERLIN 4 LOVERS portrays the love lives of seven young men and women in the environment they feel comfortable in and the radical changes in dating behavior caused by the Tinder-App.

BERLIN 4 LOVERS, a documentary about people using Tinder and dating-apps in the German capital, is a lot like the subject matter it is trying to explore — attractive in the beginning, but ultimately, a superficial experience.

Promising a sultry visual encounter, the film begins with gorgeous drone shots above the Hauptstadt. Asymmetrical birds-eye framing of streets and sidewalks, the Oberbaumbrücke, and what looks like Tempelhofer Feld remind you of card stacks, as overhead shot of cars turning left and right invite you to play the game. Sexy? Sure, but the next 70 minutes is cinematically poor. After the opening sequence, you quickly discover that those drone shots, like a Photoshop filter, hide the documentary’s fundamental flaws.

In a series of tedious dates, separated by uninspired shots of Kottbusser Tor, Friedrichshain, and the Fernsehturm, the film introduces a cast of not very diverse interview subjects who are similar in age, creative occupation, and what they have to say. Here are some of those pearls of wisdom about Berlin and the dating scene: "Berlin offers freedom and anonymity, it’s hard to be alone in Berlin, no one can decide on one person because there may always be someone better, Berlin can make you lonely, Berliners wear a lot of black, Brazilian girls are friendlier than German guys, people are replaceable both as dates and low-wage workers, people come to the city to find themselves but they can also get lost in the party scene, and the party culture is the best in the world. "

One common complaint is that dating prospects are lazy because they don’t want to put time or effort into knowing the real person. Ironically, the filmmakers themselves don’t make an effort to get to know their subjects, failing to draw out the vulnerability and trust needed for a successful conversation. There are some exceptions. A woman discusses being raped by someone she met on Tinder, and a couple who met on the app discuss growing close during a parent’s dying days. The man and the woman are now having a baby. Unfortunately, most of the interviews are either rambling or add no new insight about technology’s role in the human search for intimacy.

The film’s best match for this question is Dennis, a refreshingly self-reflective character who waxes philosophical about how people try to digitally represent a life that they can’t live up to in reality. Making smart connections between intoxication, impatience, and idealized selves, he’s the best at articulating the hyperspeed wonderland that is Berlin. But just as you want a second date, the filmmakers move on to the end credits.

If you’re bored and looking for a distraction, then BERLIN 4 LOVERS might be for you. Otherwise, save yourself the date money and swipe left.