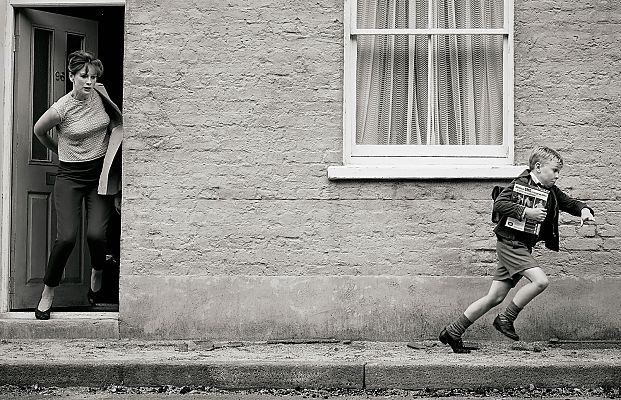 Nine year old Buddy grows up in 1960s Belfast in a Protestant family who are thinking about moving to England while the “Troubles“ escalate around them.

You always have to be cautiouswith Kenneth Branagh. When it comes to putting Shakespeare on stage, he‘s hard to beat. But in the cinema, things are sometimes less clear with him. What can you expect when the actor and filmmaker suddenly searches for inspiration for new film material by using his own past? BELFAST is the result of such a self-reflection process, since Branagh was born in the north Irish capital on December 10th 1960 as a son in a Protestant family. He spent his early childhood on the streets of Tiger‘s Bay, one of the flashpoints of the north Irish conflict since the 60s. Molotov cocktails fly there in August 1969 and set entire streets on fire. Nine year old Buddy (Jude Hill) also gets a sense of the violence that suddenly surrounds him. He sees the alarming news on TV, armed men in barricades, eavesdrops on his parents (Caitríona Balfe, Jamie Dornan) and his grandparents (Judi Dench, Ciarán Hinds) during their heated conversations, yet doesn‘t understand why his family has to move from his beloved home. His life amongst model cars, films (from HIGH NOON to CHITTY CHITTY BANG BANG) and his first love continues to be there like before.

Branagh depicts the time before he and his parents moved to English Berkshire in high-definition black and white and a touch of technicolor reflecting the director‘s early passion for Hollywood. It is mostly a world filled with fantasy and adventure here which characterizes the tough working-class milieu in the midst of bubbling conflict. But does such a romantic view of a brutal past have to be a bad thing? For Branagh, who looks back with the eyes of a child, it only lends perspective. It suits him, his cinema, his likeable disposition. And BELFAST is a harmonious film, at least from this perspective, describing an attitude towards life with a lot of verve and passion instead of wanting to appear overly critical in some way.