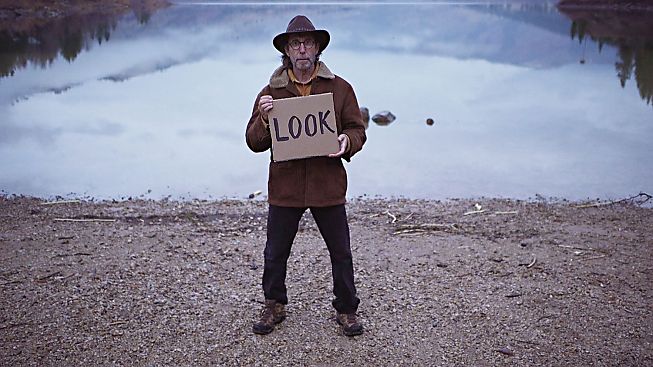 A visual meditation on humanity’s place in the natural world.

BECOMING ANIMAL is a combination tone poem, philosophical treatise, nature documentary, and road trip movie based on the deep-nature philosophy of writer David Abram (and particularly his book of the same title). The film, co-directed by Emma Davie and Peter Mettler, takes place in and around Wyoming’s Grand Teton National Park, as the two filmmakers and Abram drive and hike their way through the natural world.

While the film opens with a wonderfully taut series of shots featuring a moose in a meadow and an elk calling out in the darkness, it proceeds to take an unfortunate turn into unnecessary introspection. As Davie wonders how to “bring nature into” her filmmaking, Mettler sets up cameras and mics, and Abram pontificates at length on the nature of perception. Amidst all of this, the haunting shots of pure nature that opened the film are nowhere to be found. Ironically, taking the focus away from nature and putting it on people (humansplaining?) works somewhat counter to the film’s overall message of reclaiming our connections with the natural world.

After the first act, the film thankfully finds its way again, becoming more incisive and forward-thinking when it initiates an increasingly focused examination of natural and human history. Over shots of petroglyphs, the filmmakers discuss how the desire to read and write are simply extensions of our early interactions with the natural world, where the first “words” were letter-like animal tracks and the calligraphic flow of rivers. With the shift to an actual letter-based alphabet, a “new and very concentrated form of animism” began, with letters standing in for real objects like rocks and spiders.

This middle section of the film sees not only an increased philosophical rigor, but also an aesthetic one. Beautiful shots of rivers, trees, and mountains are juxtaposed with gas stations, interstates, and airplanes flying overhead, all accompanied by soaring, choral and instrumental music that evokes films like KOYAANISQUATSI and BARAKA. While BECOMING ANIMAL never approaches the intensity of those films, it nonetheless begins to feel like something is at stake.

Towards the end, the film explores yet trippier territory, with sped-up footage that blends together into moving patterns, transitioning into startling shots from a camera strapped to the back of a flying bird before shifting into the cabin of a plane, presumably on the filmmakers’ way home from their trek into nature. “We are flying, and have almost forgotten to notice”, says Davie, aptly summing up our disinterest in the technical marvels that surround us. It’s an apt statement, and the film’s final linguistic meditation on “spirit” and “psyche” (both of which mean “wind”) feels like a well-earned coda.