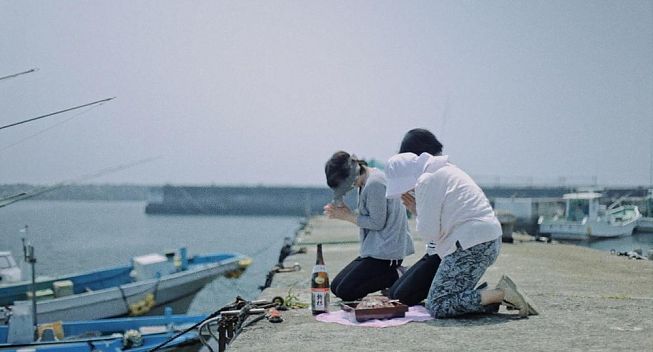 The Japanese “women of the sea“ dive into the depths of the Pacific Ocean to collect mussels and other ocean treasures, without oxygen or any other aids. A documentary

The Ama-San are maintaining a thousand-year Japanese tradition. They are the “women of the sea.“ Without oxygen or any other aids, they dive deep into the Pacific Ocean, sometimes to the seabeds, to collect mussels and other ocean treasures. The oldest of the three women, whom Portuguese director Cláudia Varejão visits in a fishing village on the Izu peninsula, is 85 years old. Matsumi, Mayumi, and Masumi have worked together for 30 years. The meticulous preparation for the dives are done with the same care as the dive itself when they go searching for the unknown looking for saleable living beings. It‘s routine for them, andviewers discover the calm and fascination of the underwater world. The film also seems to move in the slowed-down speed of weightlessness. The opening credits appear after 15 minutes. The scenes are long, there aren‘t many cuts, and the camera observes the women calmly. We follow them not only during their dives, but also in their most mundance errands, as they pray or go to karaoke. The questions that may pop up are things viewers have to answer for themselves, there are no accompanying commentaries or interviews with the women. Those who open themselves up to it will gain detailed insight into a distant cultural area – which also questions ideas on traditional women‘s lives, not just in Japan, which is why it‘s a nice surprise that this film is getting a cinema release 3 years after the beginning of its festival run in Germany.