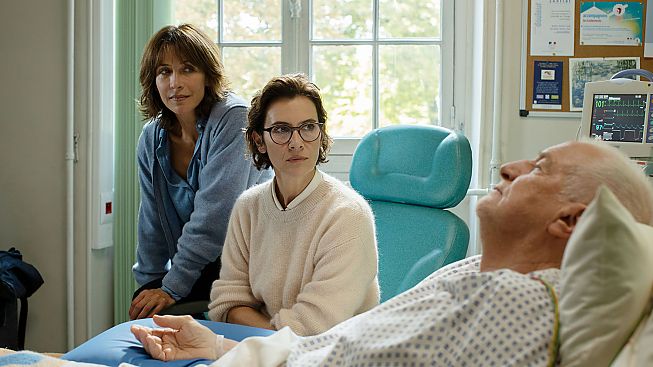 When art collector André realizes he will probably never be as self-sufficient as he was after having a stroke, he decides to end his life. His daughter Emmanuèle is meant to organize the assisted suicide.

Live and let live, the saying goes. But when you‘re dying there are different rules. Former business man André (André Dussollier) senses that when he stops wanting to live after having a stroke. He never wants to be reliant on others in old age. He doesn‘t want to end up like his bitter ex-wife (Charlotte Rampling) who was once a well-regarded sculptor and can now barely walk a flight of stairs and looks at her sculptures in her studio alone. So the wealthy “bastard,“ as Emmanuèle (Sophie Marceau) lovingly calls him to her sister Pascale (Géraldine Pailhas), asks her, the youngest daughter, to do what is necessary to end his fragile state as soon as possible. The writer reluctantly researches because she knows she has no choice. Her father is tough and extremely stubborn. The two daughters decides to meet an employee at a Swiss hospice (Hanna Schygulla) who will take control of things. But things get complicated because André‘s health improves yet his decision doesn‘t change.

François Ozon has directed 21 feature films following his debut SITCOM (1998). The precision, self-confidence and dedication that is present despite the enormous speed in which he works is quite astounding. He takes on the topic of assisted suicide in TOUT S‘EST BIEN PASSE in an unsentimental and unbiased way, but still with feeling, A different director might‘ve turned the autobiographical novel template of Emmanuèle Bernheim into an oppressive melodrama. Ozon, however, relies on sensitive rationality and warm humor.