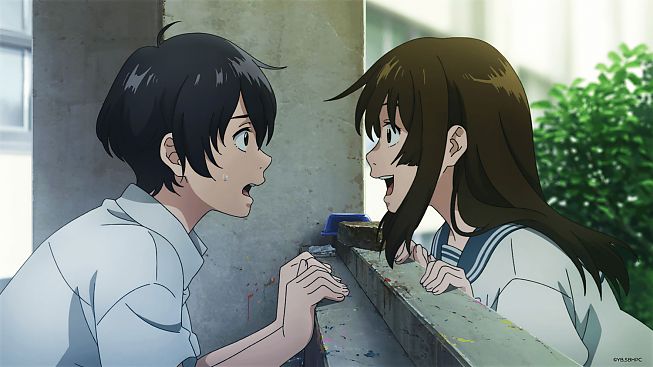 Sing A Bit Of Harmony

The cinema series “Crunchyroll Anime Night“ has been showing very successful Japanese anime in many cinemas for a primarily very young audience for some time now. It is time for us to stop ignoring it, especially because excellent modern anime films like BELLE, YOUR NAME and WEATHERING WITH YOU have made the jump into arthouse cinema in recent years. The newest Crunchyroll Film SING A BIT OF HARMONY is less intricately animated and not as cleverly written as those big productions, but it tells a romantic, friendly and pretty weird story too.

In the near future, everything is equipped with artificial intelligence and robots. Satomi is a loner at her school. Ever since she ratted on an older child who smoked in the electronic club room, she‘s been cut off by the others. Even Toma, her childhood best friend, doesn‘t want to have anything to do with her though Satomi has done everything for him. Satomi‘s mother is an engineer and has created a robot in the shape of e teen girl Shion who will now – secretly – be tested at Satomi‘s school for a week. Shion goes to Satomi‘s class, approaches Satomi and asks “Satomi, are you happy?“ and sings a song to cheer Satomi up. On the first day, the students find out that Shion is AI, but they decide to keep the secret to themselves. Shion‘s only goal seems to be making Satomi and everyone else happy. There are dark conspiracies, gentle romances, a small Tamagotchi with a big plan and nice musical numbers. It would be hard to find a more optimistic film in which AI achieves almost infinite power and everything gets better for it.