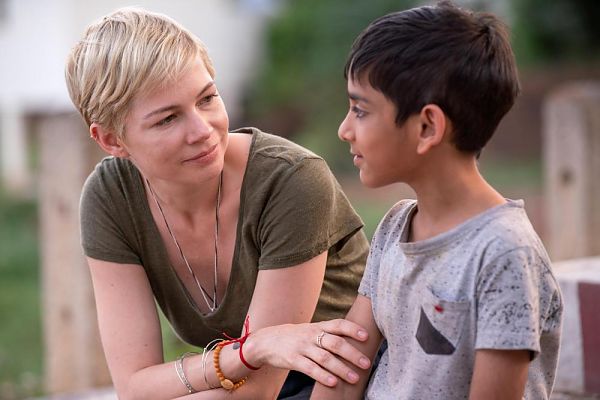 Isabel (Michelle Williams) had dedicated her life to working in an Indian orphanage. Businesswoman Theresa (Julianne More) brings her back to New York under the pretense of wanting to donate money, but she actually has an entirely different motive.

Isabel (Michelle Williams, timid and awkward) sits in an Indian village and meditates with children from an orphanage. She has found her place and mission here, a very fragile boy has especially won her over. When a New York businesswoman promises her a lot of money, she doesn‘t want to leave the village and travel to the US, but the condition is clear: Isabel has to be there in person in order to get the sponsorship. Cue Julianne Moore as financial boss Theresa – super-efficient, brusque, and very well-groomed. She is currently organizing her oldest daughter‘s wedding on top of having a family and a business. She invites Isabel to the wedding. She‘ll make a decision on Monday. Isabel is irritated but plays along until she realized that she knows Theresa‘s husband Oscar (Billy Crudup) at the wedding. Theresa seems to have a plan that goes beyond the orphanage. But what is it?

Bart Freundlich remade Susanne Bier‘s 2006 arthouse success AFTER THE WEDDING with a gender switch. Mads Mikkelsen was the one who turned his back on Danish society and his own family, and now it‘s Michelle Williams. The original was already very far-fetched, but it still worked. In the US remake the psychological holes and emotional shortcuts are clearer, but that only becomes obvious in the last third when the big melodrama strikes. Till then it‘s fun to watch Michelle Williams and Julianne Moore, one of them suspicious, the other overbearing, as their different but equally unwavering personalities clash.