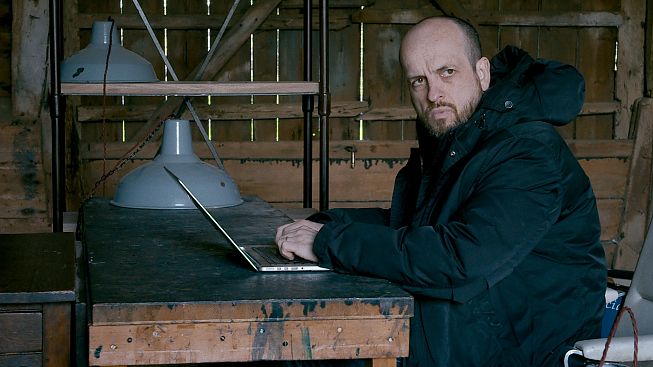 In 1929 Russian director Dsiga Wertow made MAN WITH A MOVIE CAMERA and showed the incredible range of cinematic expressions that aren‘t just meant to change our perception, but also propel political action. Sound artist Matthew Herbert, whose album One Pig, for example, only consists of recordings of a pig from birth to slaughter, has a similar motivation and creative energy. With the help of his recording device, he investigates the artistic and political potential hidden in everyday sounds and the political, ethical, and philosophical implications the technological documentation of such typically overheard sounds can have. Matthew Herbert is the “Man with the Microphone.“

“You feel somewhere between Stephen Hawking, Jesus and Jimi Hendrix. The world of noise you have unleashed!“ This quote is less an expression of Matthew Herbert‘s megalomania and more a precise description of his artistic practice. This practice enables a new, sensory way of understanding. It means gaining new regard and appreciation for our daily environment. And it has political force, since Matthew Herbert connects the history of things like a pig, a fryer, or a tree with their role in the larger economic context. Unlike Matthew Herbert‘s music albums, A SYMPHONY OF NOISE doesn‘t delve into history. It shows Matthew Herbert‘s current projects during an undefined time period and gives insight into his work method and worldview this way. It would‘ve been desirable to give more space for the sounds of things in the film itself. SYMPHONY OF NOISE is a solid documentation of a simple and profound creative approach.