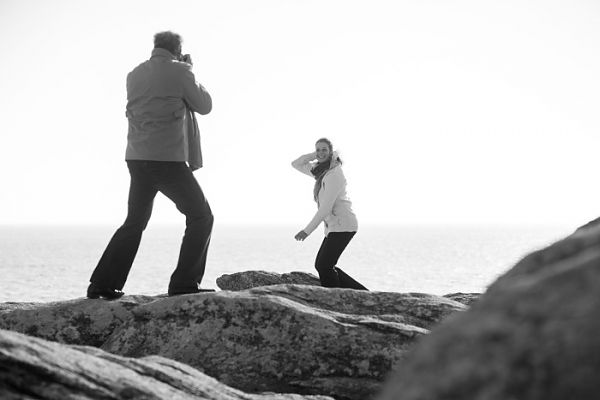 3 TAGE IN QUIBERON is about 3 days in the fall of 1981 when a legendary celebrity interview was conducted with actress Romy Schneider that has become part of her legacy.

3 DAYS IN QUIBERON, the laconic brevity of the title is a sign of what‘s to come. The title of Emily Atef‘s homage to the Austrian actress and icon Romy Schneider doesn‘t allow for interpretation, there‘s no pretense of giving a general statement on the actress who was ostracized by the German press after she broke from her SISSI image at the time. It‘s rather a snapshot, almost a polaroid. Three days. In Quiberon.


Three days in March 1981 on the bleak coast of Brittany in a nondescript fasting cure hotel with a cold, modernist style. Three days where the big, legendary Stern interview took place that is considered part of Schneider‘s legacy because it was conducted a year before her early death showing one of her last private signs of life and also because she showed her vulnerable side with sentences like “I‘m a unhappy woman of 42 named Romy Schneider.“

For the German audience who looked askance at the world‘s longing for Schneider, the conversation made the actress‘s melancholy more tangible which could perhaps be the starting point of a subsequent reconciliation. This melancholy which bordered on manic depression is what Emily Atef focuses on when she chose to isolate these 3 days from the wide array of Romy anecdotes. 3 DAYS IN QUIBERON is almost a chamber play: Schneider is lost in the world when its representatives arrive: old friend Hilde (Birgit Minichmayr, renamed for legal reasons), Stern reporter Jürgs (Robert Gwisdek), and photographer Robert Lebeck (Charly Hübner).

Emily Atef‘s beautiful film shows two sides of this woman: there‘s the Romy (Marie Bäumer) who is devastated and going through life with great difficulty and barely gets out of bed when Hilde comes to see her and there‘s the jubilant, laughing Romy whose depression goes away once the port bar starts serving alcohol and dances ecstatically to Deep Purple‘s “Hush“ with a homeless person (a cameo of French Bohème actor Denis Lavant) – a wonderful, magical rock ‘n roll moment.

Atef films everything very freely, far from the rigid, saccharine exaggeration where homage cinema tends to go. Instead, she chooses a grainy black and white that‘s akin to Robert Lebeck‘s journalistic photographs which are considered to be some of the most beautiful portraits of Schneider. The narrative attitude is fragile: not a lot is discussed, they are detected – especially by Jürgs, who is shown as the sleazy manipulative “bad guy“ a litte too much in the beginning but go through a development which Gwisdek‘s nuanced take lets shines.

It‘s a great actor‘s film in general and lets everyone shine in their own way – chiefly Charly Hübner who was cast slightly against type and Marie Bäumer who disappears into the role of the vulnerable diva to the point where you start feeling like Romy Schneider came down to earth to make her last film.


3 DAYS IN QUIBERON is mostly set in hotel rooms. This spatial limit gives room to what‘s important: the drama of a woman at the (unconscious) end of her career, the emotional highs and lows of a depressed person, and the deep pains of an actress. It‘s always great when Bäumer/Schneider sheds this pain, frolics around, or goes to bed with Hübner/Lebeck in a gentle, friendly way. A great 2018 homage that mostly avoids the trappings of German state-supported cinema – it‘s far from being the worst way of keeping the memory of a great artist alive.